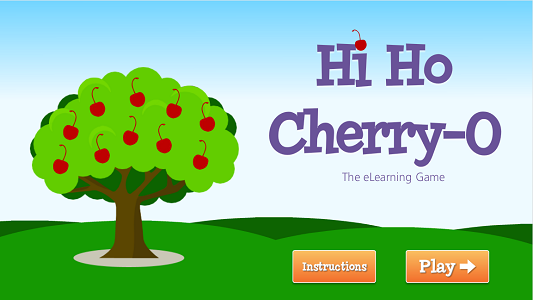 This week’s eLearning challenge was number #137, Share Your Classic eLearning Board Games. I’m a huge fan of board games, so I knew I had to participate. I also liked that the submissions had to be new creations, as there had been a number of different game challenges in the past.

I chose the game Hi Ho Cherry-O as the basis for my submission. This is a game I used to play as a kid. It’s aimed at 3-6-year-olds and it teaches addition, subtraction, and chance. The goal of the game is to harvest all of the cherries from your tree before any of the other players. The spinner determines if you successfully harvest a certain number of cherries, or if disaster strikes and your bucket gets knocked over or raided by a dog or bird. I chose to build a single-player game. A two-person game wouldn’t be that bad to build once you have the basics completed.

For the first part of the challenge, I used Javascript to generate a random number. Storyline doesn’t have a random number generator built in, so I found two options while researching how to do this. The first option is using a question bank. The question bank will pull a random slide, which can change your variable (in this case the spin value) to a certain number. I couldn’t get this method to work with repeated spins.

The other option is to use Javascript to generate a number. I’m not super familiar with Javascript, but the code is pretty simple to be able to generate a number between 1 & 7. Once I was able to set the spin value variable, then I was able to change the number of cherries harvested value. This, in turn, allowed me to change the state of the tree and bucket. I created eight states on the spinner (the default with no animation and then seven for the different spin positions), 10 states on the tree cherries, and 10 for the bushel cherries. Once the number of cherries harvested reached 10 or more, the game was finished and the learner is directed to the last slide.

I had a lot of fun building this interaction! The list of triggers on the main game play slide is a bit intense, but it was neat to see everything come together. I also got a lot of practice editing free stock images in PowerPoint and creating my own. Apparently, free cartoon images of bushel baskets are in short supply. Who knew?