I don’t play the Millennial card very often, but I do think it’s a factor in my terrible handwriting and drawing skills. Why use paper and pencil when computers exist? I was, therefore, a bit apprehensive about this week’s eLearning challenge, Create and Share Your Own Hand-Crafted Explainer Videos. The challenge is based off Common Craft videos, which use hand-drawn graphics to create videos designed to get an audience all on the same page. Nevertheless, it had been awhile since I last created a video, so I went all in.

I started by picking a topic. The Common Craft videos I watched all illustrated a concept, rather than a step-by-step procedure. I decided on Flexible Spending Accounts (FSAs) because I’ve been dealing with some parking/commuter card issues lately.

Once I had the topic, I went to work writing the script. I’ve done this before with instructional videos, so it was pretty easy for me to write out what I wanted to say efficiently. I made a column for the narration and a column for the matching visuals. In the end, I deviated a bit from this when I got to the drawing phase, but it got everything organized. 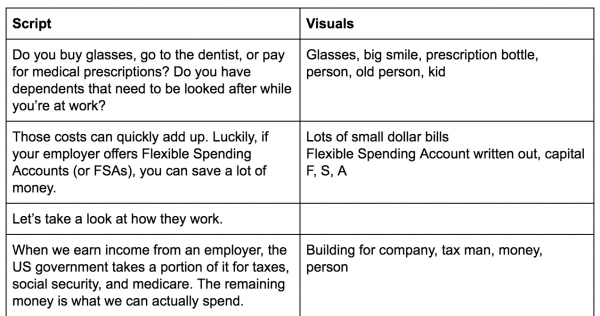 For my graphics, I did some googling for some basic stick figure designs, then started drawing. The original Common Craft graphics use a colored border just inside the black border to give the graphics personality, which I really liked. It cut down on the amount of work I’d have to do.

In the end, I needed to make a variety of graphics, including different versions of the same thing to use when animating something. This is what my table looked like halfway through: 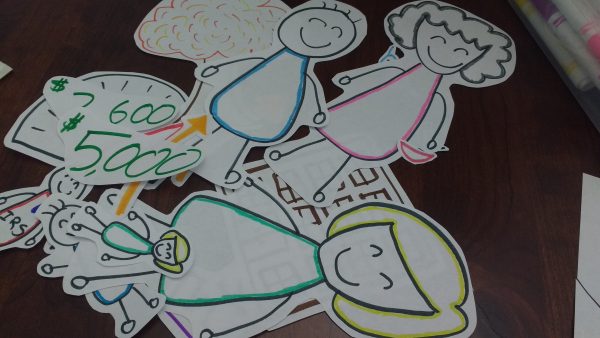 Then I set up to shoot the scene. I played around with a couple of set-ups but ended up using a white poster board as my background with a tripod-mounted camera on one side about a foot above it. Although I would have liked to shoot from directly overhead, the lighting was too weird to make it work. I shot about 18 minutes worth of footage for this 2:18 video. I had originally planned on using a lot of cuts to make the graphics appear and disappear, but after seeing the footage sped up, I decided to keep a lot of the hand movements in the video.

To edit the video, I used Camtasia. I had to do a lot of slicing and dicing to get the speed of the video just right (as well as cover up one or two mistakes). I recorded audio on my Blue Yeti Snowball microphone. The background music is a song called Lenny’s Song, available from Wistia. This is what the project looked like when I was done: 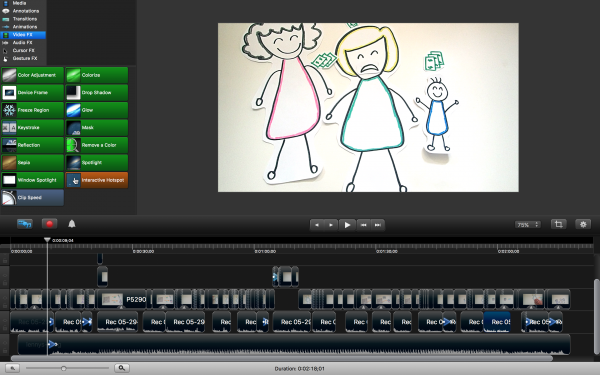 To finish, I added in captions and then exported.

Click here to watch the video. This is was a fun experiment, but I don’t think I’d ever use it professionally. I could make a video like this in Keynote or Powerpoint in a fraction of the time. Drawing and cutting out the graphics took a lot longer than I thought it would!